introducing one of our 2022 Awardees!

The May Natural History Museum: Home to Herkimer - The World's Largest Beetle

Nominated by Diana Fruh
Director of The May Natural History Museum 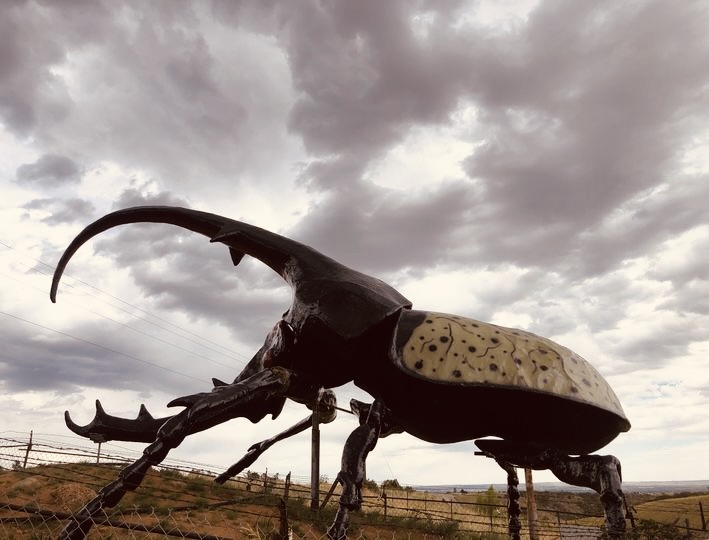 The statue of Herkimer, the World’s Largest Beetle, has been the trademark of the May Museum since 1954. He is a male specimen replica of one of the world’s largest beetle, Dynastes Hercules, which is native to the West Indies. The scale is one-foot equals ¼ inch. He is 10 feet tall and 16 feet long. John May, founder of the May Museum, designed and built the beetle in 1949. Herkimer was moved to the May Museum location in Weeki Wachee Springs, FL in 1954. After the Florida location closed, he was transported back to Colorado Springs in the back of May’s pick-up truck. Actual Hercules beetles can be seen in the museum collection. Specimens can be up to nine inches long, weigh half a pound and often males can carry the females around in their two big jaws. John May admired the brute strength of the male Hercules Beetle and was inspired to create a giant version of the creature to enhance the experience of his museum customers. 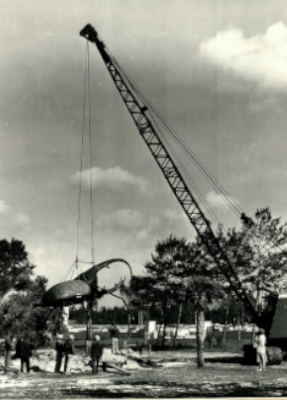 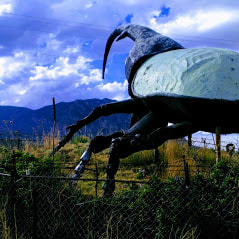 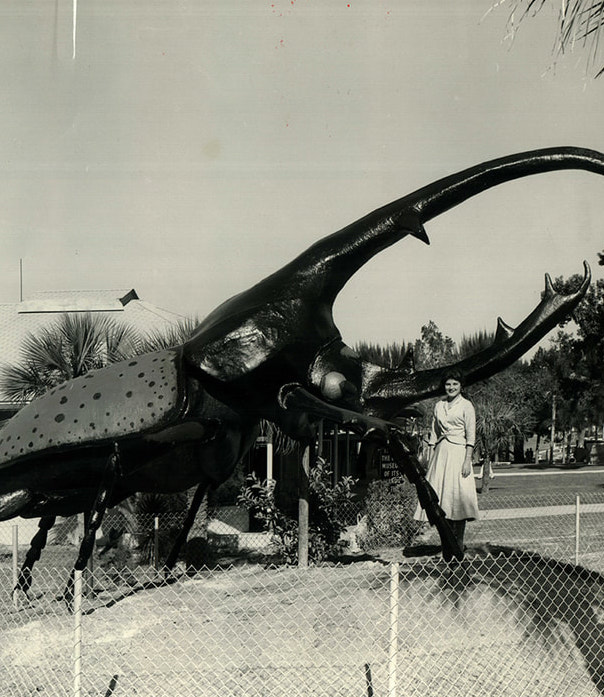 On April 18, 2022 Herkimer, the world’s largest beetle and guardian of the May Museum began the first leg on his journey of restoration. The May family worked diligently to dismantle and move him to the indoor pavilion located on the Golden Eagle Ranch property. It had been decades since any major work had been done on the giant Hercules Beetle. He was in dire need of repair lest he be lost forever. At substantial cost, the May family hired professional artist, sculptor and owner of Enchanted Castles Studio, Mark Cline, to complete the repairs.

one piece at a time

the world’s largest beetle and guardian of the May Museum begins the first leg on his journey of restoration.

Over the course of four days and through a painstaking process, Herkimer was sanded, patched with fiberglass and coated with resin. Artist, Mark Cline, orchestrated the entire process and members of the May family participated as well.

On May 3, 2022 Herkimer, the World's Largest Beetle was transported off the May Family Property for the first time in sixty eight years. He was driven in a pickup truck and trailer to the airport hangar of Gene Kear, professional Aircraft Refinisher.With the help of May Family Members, Dave DeVere and Mike Woolf, Herkimer was sanded, primed and painted.

After a seven week absence on June 6, 2022, Herkimer now fully restored returned to his post on the May Family property along highway 115. Taking the giant Hercules beetle apart was a much simpler process than putting him back together.

The entire project was a huge undertaking for the May family. Dismantling Herkimer using our family business backhoe was a very precarious endeavor. In late April the weather conditions were incredibly windy making it difficult to sand and apply the resin. Securing a truck and trailer and transporting the beetle safely to the painting site was challenging. Luckily, a family member was able to volunteer his own truck and trailer. During early May, the Red Flag conditions in El Paso County delayed the welding project for several days for fear of creating a spark and starting a grass fire. Thankfully, the May family property received rain but this left the ground incredibly muddy. Thus, reassembling Herkimer was a huge logistics project as the mud was so slippery it was difficult to place the beetle back on his perch using our backhoe.

Herkimer has been a quintessential Colorado Springs icon for over 70 years. During Herkimer’s absence from his post on Highway 115, the museum received many phone calls and emails asking what had happened to the gentle giant. Truck drivers conveyed that the giant beetle was a mile marker for their location while traveling. They would update their boss saying – “I’m just passing the bug. Should be to Colorado Springs in about 20 minutes.” Travelers who pass through Denver International Airport can spot a picture of Herkimer on the map of Colorado hanging on a terminal wall. For decades, countless local school children have gone on field trips to the Bug Museum.

In the June 2022, the May Museum, including Herkimer, was the main draw for the Society for American Travel Writers (SATW) conference in Colorado Springs. Although our city has many amazing local attractions, including Pikes Peak and Garden of the Gods, the SATW leadership conveyed that the “Bug Museum” was the deciding reason they chose Colorado Springs as the site of their annual conference. As a result of hosting over 50 travel writers, our region has received countless articles designed to Colorado Springs has been a travel destination for nearly 100 years. Tourism was and will always be a substantial part of our local economy. Restoring such a historic piece of the Pikes Peak Region tourism history keeps our heritage alive. One man’s creation designed to improve his museum customers’ experience has become an icon to our city and our state. The May family educate the public about the benefits of visiting Colorado Springs.