Please check back for link to the recording of this event to be posted May 26th. 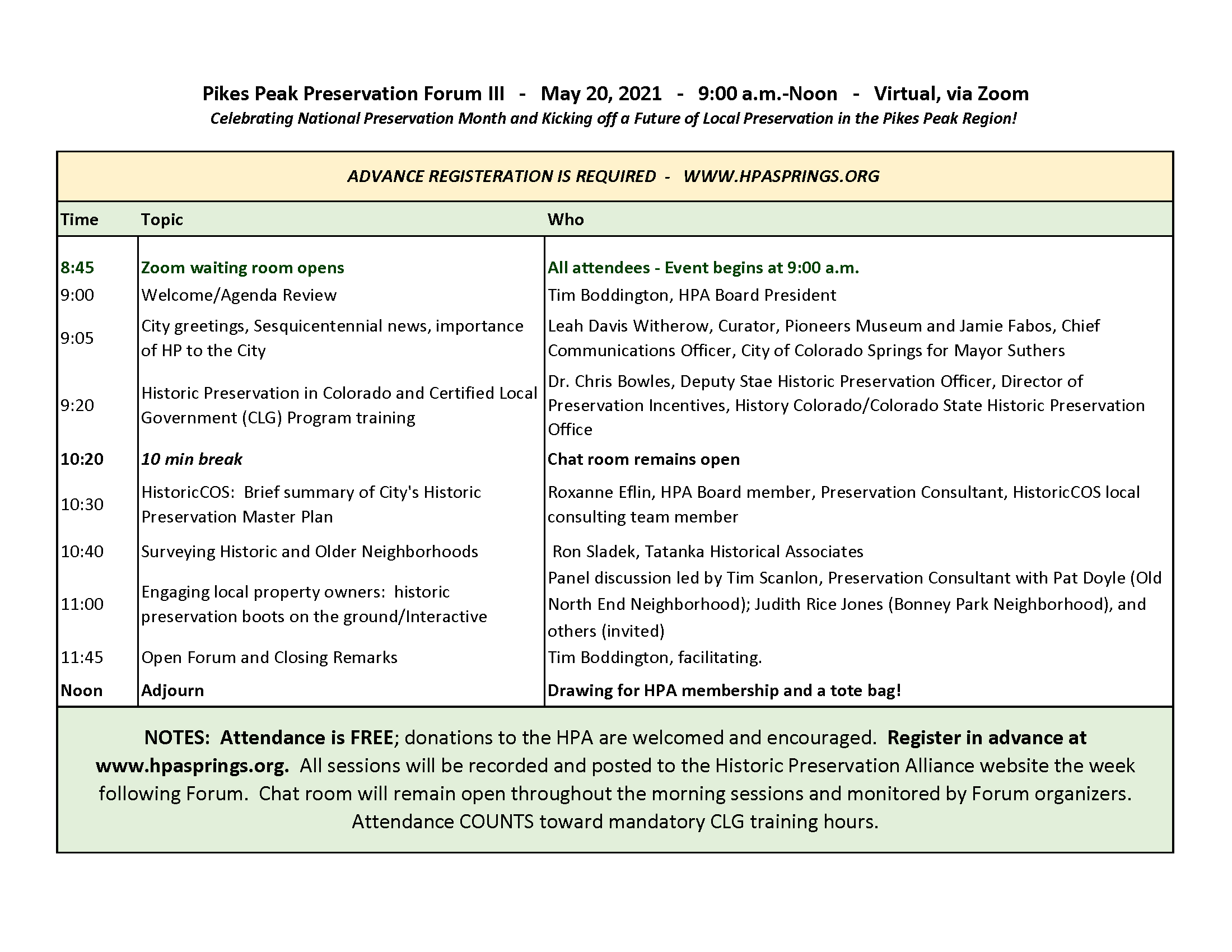 Tim Boddington is a lifelong resident of Colorado Springs, a second generation native.  He is the president of the board of directors of the historic preservation alliance of Colorado Springs, who is hosting this educational event. He has served on the Boards of UCCS Gallery of Contemporary Art and El Pomar Sports Park. Tim is retired and has expertise in construction, historic window restoration and replacement and fine woodworking, his hobby.

Leah Davis Witherow is the Curator of History at the Colorado Springs Pioneers Museum, where she has curated over three dozen exhibits. Additionally, for the past 21 years she has taught courses at UCCS where she specializes in the history of American Women, Colorado and the West, Labor History, the Progressive Era, and Museum Studies. In 2014, she was selected as UCCS Outstanding Lecturer for the LAS Department, and was honored in 2018 by the CSBJ as a “Woman of Influence.”

Jamie Fabos has been the Chief Communications officer for the City of Colorado Springs for five years. Prior to joining the City, Jamie spent 15 years working in the sports industry, including Olympic sports, which brought her to Colorado. Jamie is a proud military spouse and mom to 9-year-old twins.

Dr. Chris Bowles, History Colorado’s Director of Preservation Incentives and Deputy State Historic Preservation Officer.  He is a 4th generation Coloradan with a deep love of the State’s rich prehistory and history, its people and the places that they hold dear. He holds a BA in Anthropology from CU Boulder, a Masters in Archaeology from the University of Edinburgh and a PHD in Archaeology from the University of Glasgow. For over 20 years in Scotland he worked in Cultural Resource Management and as a local authority heritage planner before returning to our state in early 2020 to work with History Colorado.

Roxanne Eflin has held leadership positions with numerous national, state, regional and local organizations and boards, and has been honored for her advocacy work in the field of historic preservation and downtown revitalization.  Her private and public sector experience includes positions of Board President for the Historic Preservation Alliance of Colorado Springs, Executive Director for three statewide historic preservation organizations both in Colorado and Maine, and as consultant, public speaker and trainer, cultural tourism manager and grants reviewer.  She is a consulting trainer with the National Alliance of Preservation Commissions and served on the consulting team who developed HistoricCOS, the recently adopted historic preservation master plan for the City of Colorado Springs.

Ron Sladek is a professional historian and preservation consultant, and also works in the non-profit arena as a preservation advocate.  Active in the field since the late 1980s, he is the founder and principal of Tatanka Historical Associates as well as Historic Larimer County.  Based in Fort Collins, Ron has completed hundreds of preservation projects involving a tremendous variety of historic resources throughout the Rocky Mountain west and remains in high demand for his consulting services.  Ron worked as a consultant with me to develop HistoricCOS and is well versed in local survey work.

Tim Scanlon earned a Master ‘s degree in Regional and City Planning Degree from the University of Oklahoma and first worked as a federal grant specialist for the City of Oklahoma City. From 1985 to 2009 he worked for the City of Colorado Springs, attaining the position of Senior Planner in the Comprehensive Planning Division.  A primary responsibility was his support of the City’s historic preservation efforts, including the development of its first preservation ordinance in 1988 and the first historic preservation plan in 1993 He currently functions as a historian.

There were errors with your submission. Please try again.