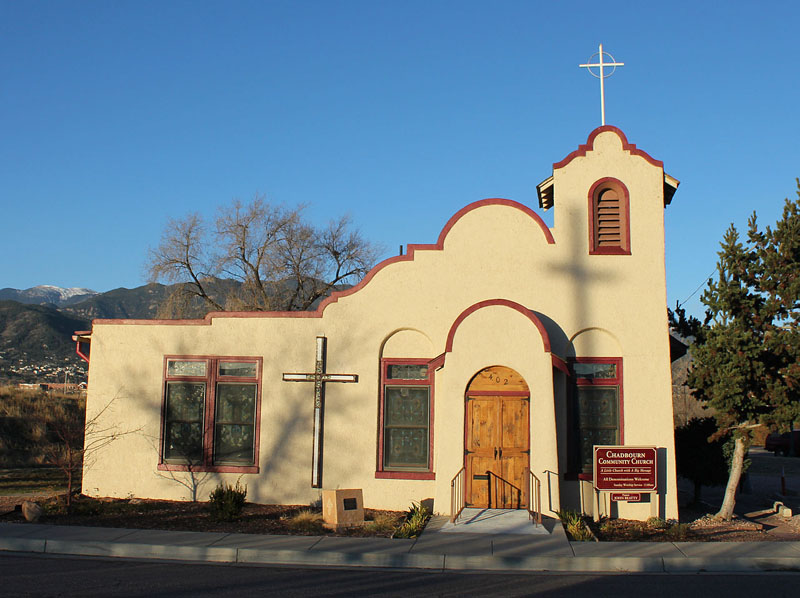 The Mission is significant for its association with the Hispanic neighborhood that once flourished during the early 20th Century.

Originally a small grocery and residence, built sometime during the 1910’s and serving many Jewish and Scandinavian families, it was transformed into a mission and community center for nearby Hispanic residents in the 1930s.

The principal motivator for the mission was Ruth Chadbourn who had served as a missionary in Costa Rica. She obtained funding and staffing from local churches for bilingual Sunday religious services, and classes in English and sewing. It became an interdenominational mission supported by the principal Protestant denominations of the city.

The building was named for Ruth Chadbourn after her death in 1936. A major expansion in 1939-40 added room to the south and stuccoed the building.

This building is an example of Mission Revival style, with a projecting tower, shaped parapets on the gable ends and stained glass double-hung windows.

Click here to learn more from three scholars on the fascinating and timely topic of  Colorado’s vital role in the Suffrage Movement.  The HPA was proud to co-host three superb lectures with the Colorado Springs Pioneers Museum:

Please continue to monitor our website and Facebook page for updates. We wish all of you well and encourage you to use this time to access the myriad online learning tools including our new Click and Learn Library regarding historic preservation.  Together we will weather this storm.  Be well, be safe.

We share your concern about the FUTURE of the historic Union Printers Home.  The future of one of our community’s most treasured landmarks is uncertain. The HPA is advocating for its protection and future use. Click HERE for the latest.  You can help – join us today and get involved!

Thank you – The Colorado Springs City Council unanimously adopted HistoricCOS – the City’s new Historic Preservation Master Plan – on Tuesday morning, Dec. 10, 2019.  THIS IS GREAT NEWS for our community!  Implementation will begin shortly.  The plan is visual, reader friendly and extremely informative – click here to access the plan and learn more!